Welcome to the eleventh issue of ZirChrom's electronic newsletter. This newsletter introduces our new line of zirconia-based chiral HPLC phases, ZirChrom®-Chiral. These new patent-pending chiral stationary phases incorporate the unsurpassed chemical and mechanical stability of zirconia with the flexibility of Lewis acid/base anchored chiral selectors. Portions of this newsletter were excerpted from an article published in American Laboratory, 37, No. 21, pp 22-4 (October 2005).

In recent years, high-performance liquid chromatography has become the dominant method for the analytical and preparative separation of chiral pharmaceuticals. (1-5) However, until now, no chiral stationary phase (CSP) used zirconia or inorganic oxides other than silica as a substrate. Zirconia has many attractive properties for HPLC, including spherical particle shape and narrow size distribution. Additionally, it exhibits unsurpassed chemical and mechanical stability. Its surface chemistry is very different from silica gel due to the presence of a high population of strong Lewis acid (Zr+4) sites (see Figure 1).

The synthesis of the ZirChrom®-Chiral phases capitalizes on the presence of Lewis acid sites on the surface of the zirconia to provide a more robust and chemically flexible platform for CSP design. (6-9)

This novel approach to the production of chiral stationary phases on zirconia that has been developed that offers significant method development advantages over other platforms. Zirconium atoms on the surface of zirconia (zirconium dioxide) particles act as strong Lewis acid sites that allow for facile attachment of chiral stationary phases by a tethering group having strong electron donor chelating properties. ZirChrom®-Chiral phases are synthesized using a simple two-step approach: 1) attach an appropriate tethering group to the zirconia surface through a Lewis acid-base reaction, and 2) covalently attach the desired CSP to the tethering group using amide bond formation chemistry. (12)  Brush-type CSPs were selected for initial experiments due to their ease of synthesis, wide scope of applicability, and large body of available silica-based separations data for comparison. An illustration of the two-step reaction scheme is shown in Figure 2, and a typical chemical reaction is shown in Figure 3 using pamidronic acid as a very strong tethering agent. 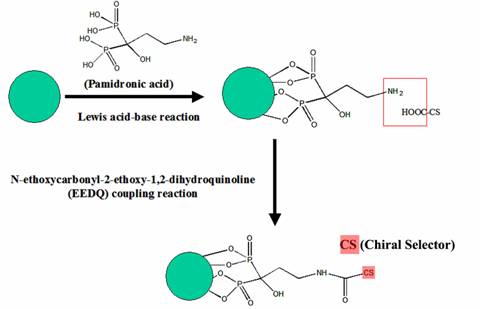 Figure 3: Example of a typical chemical reaction used to tether a chiral selector to the zirconia surface.

Chiral stationary phases produced in this manner exhibit high stability under normal-phase HPLC operating conditions, but can be completely removed by washing under aqueous, alkali conditions.

ZirChrom®-Chiral phases couple the mechanical strength and stability of zirconia with the flexibility of Lewis acid site chiral modification. This combination creates a CSP that is reproducible, durable and can be regenerated.

Robust, efficient CSP columns were successfully prepared in by the two-step reaction scheme using the chiral selectors shown in Figure 4. 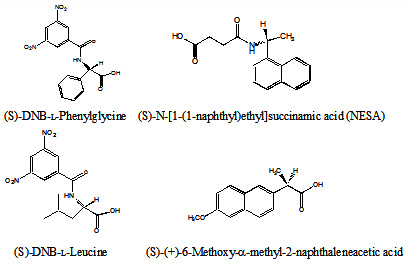 Figure 4: Chiral selector molecules that were evaluated during ZirChrom®-Chiral research.

The tethering group was allowed to react with the unmodified zirconia particles, and the chiral selector was covalently attached to the amino-modified zirconia using the N-ethoxycarbonyl-2-ethoxy-1,2-dihydroquinoline (EEDQ) coupling reaction that is commonly employed for peptide synthesis. (12) Columns produced in this manner were compared to silica columns having analogous chiral selectors and found to have similar resolving power for the selected probe enantiomers. Most importantly, the chemisorbed chiral selectors on zirconia were found to be stable enough for extended routine use; however, they could be completely removed by washing with a high pH (>pH 12) aqueous solution and could be easily regenerated. Results shown in Figures 5-7 for the zirconia-based CSP columns are comparable to the performance of silica-based columns having a similar chiral selector. 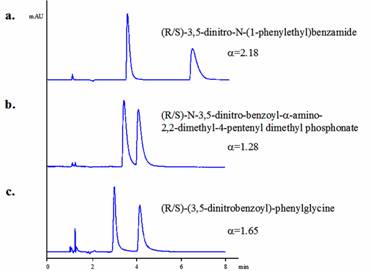 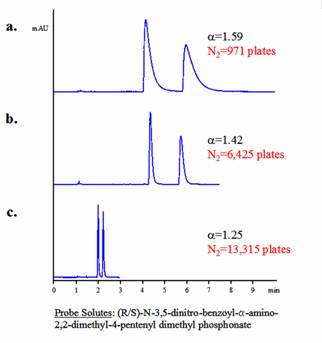 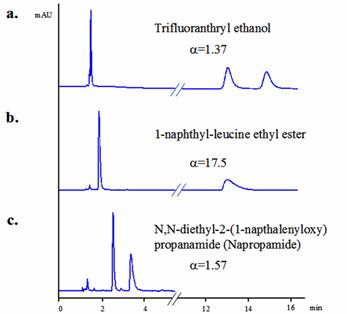 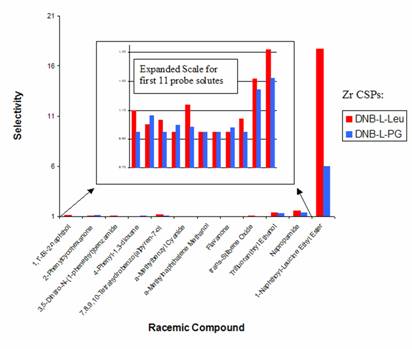 Data on the stability and reproducibility for the ZirChrom®-Chiral(S)LEU CSP column used in Figure 8 are shown in Figures 9 and 10, respectively. 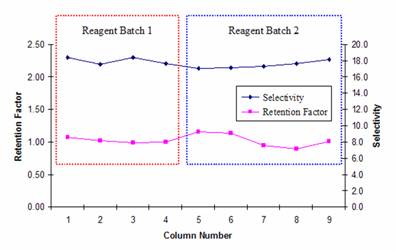 A two-step reaction scheme was employed using three different types of tethering agents. Figure 9 confirms that the choice of tethering groups has a great effect on zirconia CSP column stability. Aminopropylphosphonic acid (APPA) was the most stable among these three types with wash solvents that would be used in analytical mobile phases. Lot reproducibility studies shown in Figure 10 confirmed that a chiral selector can be attached reproducibly to the zirconia surface using the APPA tethering group in a two-step reaction scheme. Data that are not shown indicate that the choice of tethering group can also have a minor effect on chiral selectivity.

Figure 11 illustrates the single-step reaction scheme that is targeted for future commercial applications.

Figure 11: A chiral reagent containing an integral tethering group is attached to bare zirconia in a simple, one-step process.

A separation on a CSP column prepared with N-(4-nitrobenzoyl)-L-glutamic acid using a single-step reaction process is shown in Figure 12; the column was stripped and regenerated to demonstrate reproducibility of the simple, one-step loading process. After stripping, the bare zirconia column did not exhibit any retention or selectivity for the chiral analytes. Work is continuing as part of the NIH Phase II SBIR Grant to develop a wider range of chiral selector reagents with integral tethering groups that permit single-step loading under mild conditions. Phase II research has also concentrated on the use of phosphonic acid and certain multi-phosphonic acids (see pamidronic acid in Figure 3) as tethering groups for preparing very robust commercial products that are easy to coat and stable under a variety of mobile phase conditions including both normal and reversed-phase.

Figure 12: Comparison between the separation of (R/S)-2,2,2-trifluoro-1-(9-anthryl)ethanol before and after stripping and reattaching an N-(4-nitrobenzoyl)-L-glutamic acid (CSP) reagent according to the Phase II scheme shown in Figure 10. Conditions: 99/1 hexane/isopropanol; other conditions as in Figure 5.

Product development is underway for a single, highly stable zirconia column plus a kit of pure CSP coating reagents that will allow users to easily remove and replace chiral selectors by reproducible and simple methods. Chiral selectors with multiple chiral centers, featuring both pi donor and acceptor groups, are also under development, as are chiral selectors based on polysaccharides.

Additional information regarding ZirChrom®-Chiral products is available on the ZirChrom® website at: www.zirchrom.com or by visiting our booth, #220, at EAS 2005.